Atmosphere, not action, is the great desideratum of [the] weird
-H.P. Lovecraft 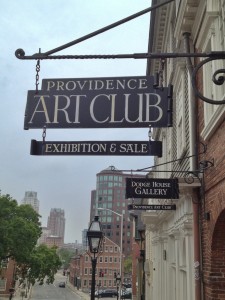 The Legacy & Future of H.P. Lovecraft in the Visual Arts

Exhibition Two, Julians on Broadway (318 Broadway 02909)
The Legacy & Future of H.P. Lovecraft in the Print

A Statement of Purpose:

Howard Phillips Lovecraft’s creative vision details an empty, materialist universe, unsympathetic to human aspiration and spiritual belief through purple literature that shivers with weird neuroses, fatally pathological curiosity and catachrestical impressionism. This universe is populated by a pantheon of ancient, cosmic beasts so alien and incomprehensible to the human mind that they can be only described as a pastiche of fearsome creatures both terrestrial and mythical, a sort of protoplasmic pareidolia. In the instance of what is perhaps his most widely known creation, Cthulhu, the dreaded thing from the stars, Lovecraft reminds us that, having gone mad from the sight of the thing, his narrator’s description, while imprecise, is not “unfaithful to the […] general outline of the whole.” 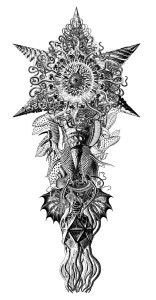 Beyond his portraits of hidden terror, Lovecraft has also been acknowledged as the godfather of collaborative creative culture. Though not operating formally as a collective unit, he actively corresponded with contemporaries Clark Ashton Smith, Robert E. Howard, Robert Bloch, Frank Belknap Long, Henry Kuttner, and Fritz Leiber, a group now referred to as the “Lovecraft Circle,” with whom he shared ideas and narrative elements.

It is in this tradition of collaboration that we continue to honor the legacy and life of a literary iconoclast. Ars Necronomica 2015 is an exhibition of contemporary and historical fine, commercial, and outsider art that further redefines H.P. Lovecraft with an unrivaled collection of work from international and regional sources. This survey will showcase and build upon the existing patina through explorations in popular culture and the visual arts.