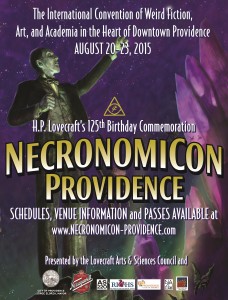 The author Howard Phillips Lovecraft was born in 1890 here in Providence, Rhode Island. During his life, he revolutionized both the horror and science fiction genres and, in 1927, coined the term “weird fiction.” His tales, and their influence, on art, film, and literature, continue to spread and find new life nearly 80 years after his death. Though much of the world he envisioned was a dark and fearful place, many consider him the greatest American writer of imaginative fiction since Edgar Allan Poe.

NecronomiCon Providence is a celebration of weird fiction and its roots in the city of Providence. It is a four-day convention that features panels and talks by experts, authors, artists, and historians who are influenced by the life and works of H.P. Lovecraft. It also includes Lovecraft-themed gaming, creative workshops, art exhibits, films, concerts, walking tours, and special events. With its broad, citywide programming, NecronomiCon Providence encourages participants out into the streets to experience and explore the very locales that inspired the writer himself.

Our first event in August 2013 saw the largest gathering of Lovecraft scholars, authors, and fans, ever. The convention brought over 1300 attendees and guests from all corners of the world, some from as far away as Australia and Japan, to the heart of Providence for a truly unique convention experience. Given the ever-increasing appreciation of Lovecraft, and the literary genre he gave birth to, we anticipate the events we have planned to coincide with his own 125th birthday, will be even more well-attended and successful.

NecronomiCon Providence is presented by the Lovecraft Arts & Sciences Council, a Providence-based nonprofit organization whose mission is to develop a community for scholars, authors, and fans exploring the literary world of H.P. Lovecraft and associated authors, in order to foster a critical review of related research, literature, art, and the cultural impact of Lovecraft’s writing on the modern world.

The Lovecraft Art & Sciences Council is a federally recognized 501.c.3 nonprofit organization. We value any contributions you can make to our ongoing efforts.  If you are interested in corporate sponsorship, please visit our Sponsors page.